How To Sear: A Comprehensive Guide

Searing is a cooking method known for the delicious flavor it builds. It is primarily used for meat but can be used for vegetables as well. When searing, the surface of the food quickly becomes browned, which creates a savory flavor. Searing does not actually fully cook the food but is simply a step many choose to add to their cooking routine in order to enhance the flavor of the food.

Searing essentially caramelizes a food’s surface and creates a savory, nutty flavor. If you’re looking for a simple way to level up your meals and enhance the flavor of your steak, chicken, seafood, or vegetables, keep reading for a comprehensive guide on how to sear.

What Is the Method of Searing?

Searing is a cooking method that utilizes high temperatures to quickly cook the outside surfaces of food until the exterior becomes brown and caramelized. Searing enhances the flavor of any dish and is easy to do. Searing must be done alongside another cooking method because this process does not fully cook food. There are general guidelines on how to sear that apply no matter what you’re searing. These guidelines are as follows:

Use a Hot Pan

High temperatures are necessary to obtain the caramelized, deep brown sear that you’re looking to achieve. A non-stick skillet is not ideal for searing. A stainless steel or cast iron skillet will produce the best results. Add a few drops of vegetable oil to the pan and place the pan over high heat. If you’re cooking meat, it may be helpful to dry off the meat before adding it to the pan in order to keep it from steaming instead of searing. When the oil in the pan is slightly smoky, you can add the meat to the pan.

Use a Thin Layer of Oil

When it comes to searing, a thin layer of oil is all that you need. By covering the surface of the pan in a small amount of oil, the heat is able to evenly distribute across the surface of the meat and create an evenly browned exterior. Without oil, some spots may burn while other spots may not cook at all. A thin layer of oil can be added by swirling oil throughout the pan as it heats up.

Make sure that the pan you’re using is large enough to evenly distribute all your food. If food is piled up in the pan, it won’t be making even contact with the surface of the pan, and it will not sear like you want it to. The searing process requires direct contact with the pan and the surface of the food. Otherwise, your food will end up steaming instead of searing.

Don’t Interfere With the Searing Process

Searing is a relatively quick process, and it will take only a few minutes for most foods to sear. When learning how to sear, some people might grow impatient and want to peek underneath the meat to inspect the searing process. They may also feel tempted to stir the pan around as if they were sautéing. Unlike some methods of cooking, food must remain untouched in order to properly sear.

As meat sears, it sticks to the pan and releases when it’s done. In order to test if the searing process is completed, you can gently shake the pan. If the meat begins to move freely across the pan, it is done searing on that side and can be flipped over.

After you’re done searing, the cooking process can be completed using another method such as roasting or grilling.

How To Sear Meat

Now that you know the general guidelines, you might be looking for a more detailed explanation of the searing process. The most common food to sear is meat. The following steps can be used to sear steak, pork, chicken, lamb, or other meat.

If you have a stainless steel or cast iron skillet, these will sear meat better than a nonstick skillet. Considering that the meat needs to stick to the pan in order to sear, a nonstick skillet is simply ineffective for searing meat. Cast iron and stainless steel skillets conduct high heat well and also allow for the meat to stick to the pan during the searing process. Pans lined with enamel and Dutch ovens can work, but you will have to keep the heat lower to prevent the enamel from cracking. 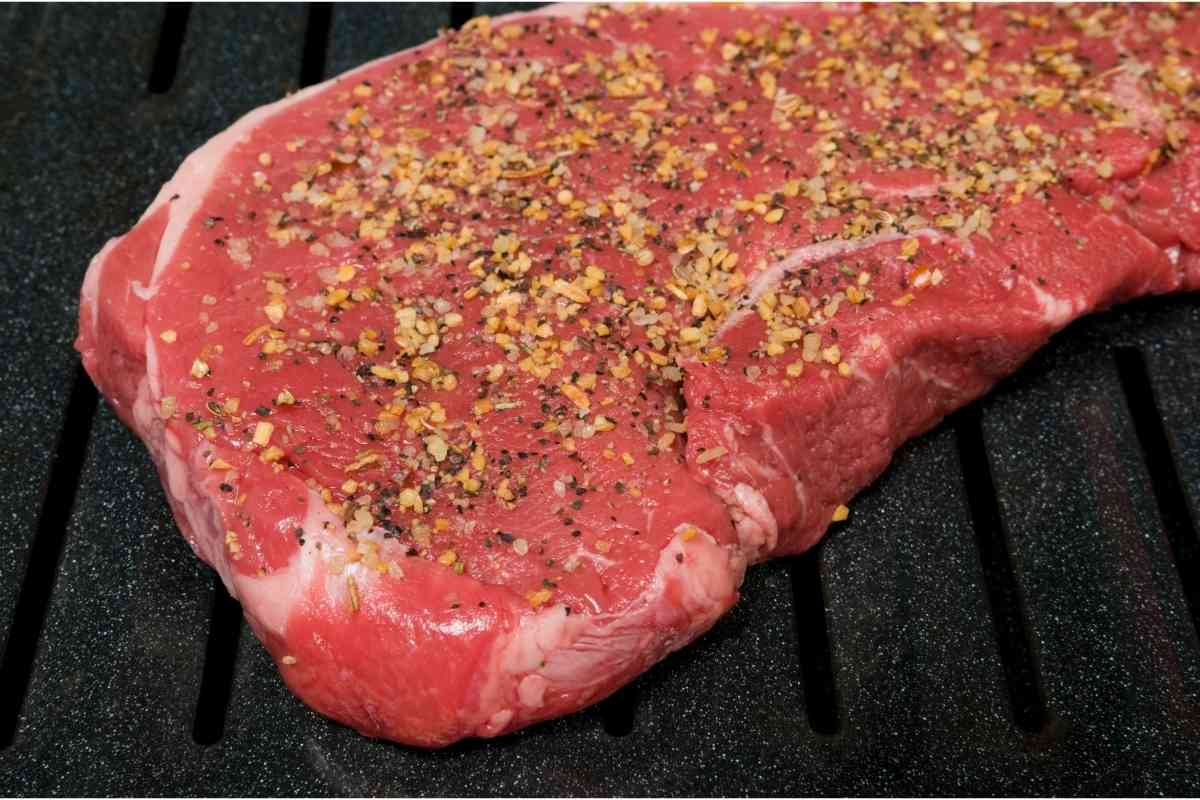 4. Season the Meat With Salt and Pepper

The taste of the final result can be improved by seasoning the meat before beginning the searing process. As the surface of the meat caramelizes and browns, the flavors of seasonings can cook into the surface. Salt and pepper are recommended because they blend well in any dish and with any other seasonings that may be used as you prepare your final dish.

You can add other seasonings that you want to include in your dish at this stage, or you can simply wait and include them later in the cooking process. When adding salt, be mindful that it will draw moisture out of the meat. Thus, you must begin the searing process immediately after adding the salt, or the meat will need to be dried off again.

5. Heat the Skillet to Medium-high

Start with your skillet on medium-high heat. Every stove top is different, and some are more powerful than others. Some stovetops offer plenty of heat on the medium-high setting, and others must be set to high heat in order to effectively sear meat. After searing a few dishes, you will learn which setting works best on your stove.

It’s safer to start off on medium-high and adjust as necessary as opposed to starting on high heat and accidentally burning your meat. Considering that searing is done with high heat, you must be careful and avoid scorching the meat.

When the oil is shimmering, flowing across the pan, and slightly smoking, it is ready for the meat to be added.

Gently add the meat to the pan. As you set the meat in the pan, it will sizzle and begin to stick to the pan. If you are cooking diced pieces of meat, ensure that there is enough space in the pan to allow each piece to make contact with the pan’s surface. If the meat is crowded, it is best to divide it up and cook it in batches so each piece can be correctly seared.

Do not move the meat as it sears. Resist the temptation to stir the meat around or manually unstick it from the pan. Do not fret, as sticking is part of the searing process. The meat will unstick on its own within a few minutes.

There may be a glaze on the bottom of the pan from cooking the first side. If there is any burning smell or the pan appears dried out, lower the heat setting and add a small amount of oil to the pan.

As the second side cooks, leave it alone in the pan until it is done searing. It will release once it is seared. If you wish, you can then sear the sides of the meat. Otherwise, remove the meat from the pan and deglaze the pan before searing additional batches.

During the searing process, a glaze will begin to form on the bottom of the pan. The glaze is a sticky brown substance called “fond.” After you have finished the searing process, place the meat on a clean plate and begin deglazing the pan by pouring water, vinegar, or broth into the pan. The glaze will begin to lift and dissolve. You may have to gently scrape the pan to remove any stubborn bits that have solidified.

Your first thought may be to throw away the liquid after deglazing the pan, but this substance can actually be used in your cooking process. If you’re making a stew or soup, this liquid can be added. Or, you can make a glaze or sauce out of the liquid to drizzle over your completed dish. The liquid will contain many of the flavors from the seared crust of the meat.

What Can I Sear?

Searing can be used to enhance the flavors of a variety of foods. Most commonly, searing is used for meats like steak. Any meat can be seared, such as pork, chicken, or even seafood. If you want to sear a vegetarian dish, vegetables can be seared as well. Carrots, broccoli, and peppers are just a few options for vegetables that are popular to sear. Searing enhances the taste of any food and brings your dish to the next level in just a few minutes.

How Much Oil Do You Use to Sear?

Searing does not require a large amount of oil. Adding too much oil to the pan can actually interfere with the searing process and prevent the meat from effectively sticking to the pan. It is important to note that the oil is not really being used as a cooking medium, but rather it is being used as a substance to enhance the cooking process and allow the heat to evenly distribute across the surface of the meat.

For a lean cut of meat such as pork chops or chicken, one to two tablespoons of olive oil will suffice. Unless you have a large pan with a lot of meat to cook, you will not need much more than that.

If you’re looking for a simple way to elevate your meals in only a few minutes, you may want to consider learning how to sear and incorporating searing into your next dish. Searing can enhance the flavor and texture of a variety of meats and vegetables.

When searing, it is important to use a small amount of oil and leave the food untouched during the searing process. Afterward, the glaze left on the pan can be removed or even incorporated into your final dish to further enhance the flavor.

Overall, searing is achievable for almost anyone because you can use the pans and oils that are likely already in your kitchen. Whether you’re a seasoned chef or new to cooking, you will be sure to impress guests or family with a seared dish.

PrevPreviousHow To Defrost Ground Beef in the Microwave Quickly and Safely
NextSous Vide Roast Beef: Everything You Need to KnowNext

As an Amazon Associate I earn from qualifying purchases.